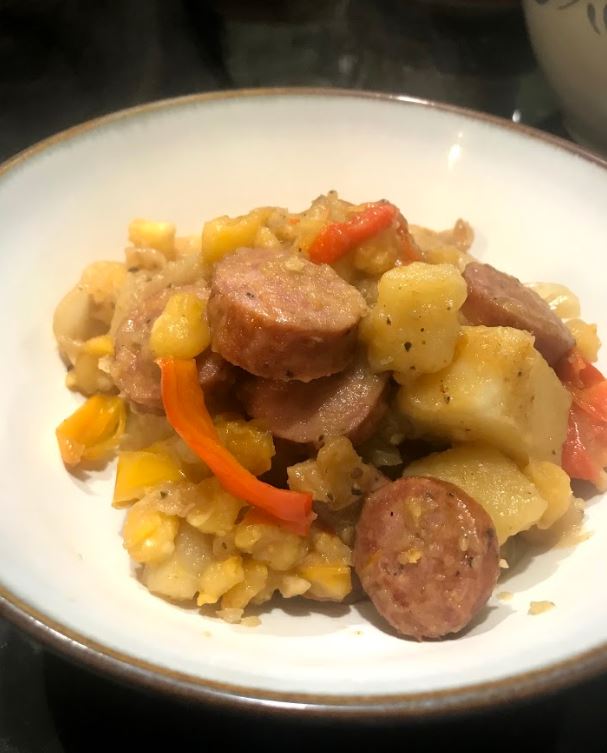 Happy New Year!  (We can still say that even if January is already two-thirds done, yes?)

If your house is anything like my house you are ready for an easy, throw-down dinner.  This is it! A one pan wonder!

I truly don’t know where this recipe came from.  I can say, however, that it was a staple in our house growing up in Weslaco.  It’s such a quick, easy go-to that I never much thought about how good it was… other than to give my mom a good (full of love) teasing about it’s frequent appearance at the dinner table.  (We’ll talk about “gourmet sandwiches” some other time, Mom 😉 )

Then I graduated from Baylor and made my move to Lake Jackson.  I’d make this for dinner and take leftovers for lunch the next day.  Without fail, every time, someone would comment on the dish and ask for the recipe.  It threw me a bit because I don’t think my mom or I ever even wrote the recipe down, it was just one of those things we could toss together.  The first time I made it for Will he loved it and began requesting this dish for dinner.  Again, it blew my mind a little.  This dish?  The sausage-potato meal we’ve always had?!

So here it is, all typed up in its one-pan glory from my childhood home to your present day: Sausage Potato Skillet.  May it make one of your upcoming dinners simply wonderful 🙂

Pay attention, this one goes quick 🙂

Saute the onion, pepper and garlic in a skillet with a little olive oil until the veggies begin to soften. Use a large skillet with plenty of room to toss everything up together.  Season the veggies with salt and pepper but start a little lighter than normal on the salt as the smoked sausage will bring some of that in for you. 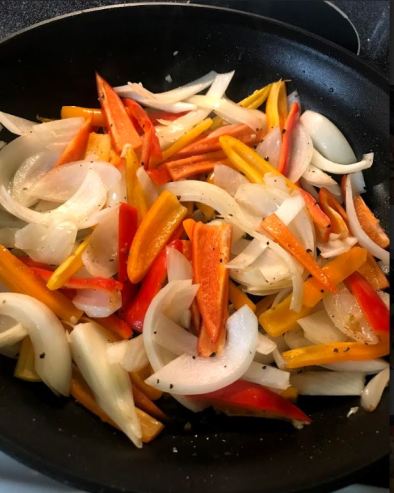 Add the sliced sausage and saute until the sausage begins to brown a bit.

Add the corn or hominy and toss it all together.

So, I love hominy.  Hominy is made from either white or yellow corn – the kernels are soaked in a solution of either lime or lye which removes the hull, and often the germ, from the kernel and causes the grain itself to puff up much larger than its original size.  The texture is definitely chewier than regular corn and, I think, has a more pronounced corn flavor.  I dig the taste and texture of hominy and often will just saute it with butter, salt and pepper as a side dish. Somewhere along the line, I decided that hominy needed to replace the corn in this dish and I’ve never looked back.   Will, however, does not share my love of hominy.  Bummer.  We often either go back to the regular can of corn here or omit it completely when making this dish at home. In an effort to give you this dish in all its original glory though, I felt it best to demonstrate with the hominy.  (Sorry, Will!)  Don’t worry, y’all.  He still ate it 😉 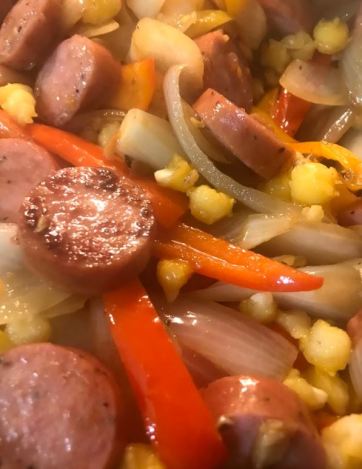 Add the cubed potatoes, tossing them around a bit to mix them in. Season again with salt and pepper. (If you like a little kick, this is a great spot for some cajun seasoning as well!)

Add enough water to just cover the bottom of the skillet, about 2 or 3 tablespoons. Cover the pan with a lid, lower the heat and simmer until the potatoes are soft, about 15-20 minutes.  If you don’t have a lid that fits your skillet, just set a cookie sheet over the skillet or place a piece of foil loosely over the top.  You want the potatoes to steam in that water and a lid helps that process.

Once the potatoes are soft, remove the lid and continue to cook until all the excess moisture has cooked off, about another 5-10 minutes.

What recipes do you have that have survived your childhood home and worked their way into your adult life?  Leave a comment and let me know!

Saute the onion, pepper and garlic in a skillet with EVOO until beginning to soften.

Season with salt and pepper.

Add the sliced sausage and brown.

Add the potatoes, toss around and saute a few minutes, seasoning with salt and pepper.

Add enough water to just cover the bottom of the skillet.

Cover the pan with a lid, lower the heat and lightly simmer until the potatoes are soft, 15-20 minutes.

Remove the lid and continue to cook until all the excess water has cooked off, another 5-10 minutes.