Will and I made an escape last week to Lake Charles.  It’s a favorite quick getaway for us, typically involving a little gambling, floating a lazy river and a visit to our favorite restaurant.  This time, we also included a jog over to Avery Island to tour the Tabasco Visitor Center and Factory.  I’d never been and it had been quite some time since Will had visited.  It also just happens to be the 150th anniversary of the brand!

We started in the museum and then wandered through five different buildings on the self-guided tour, learning all about how Tabasco products are made and distributed.  Did you know that the peppers picked when the match the exact color red of the  ‘le petite baton rouge’ and then aged in white oak barrels for up to three years? 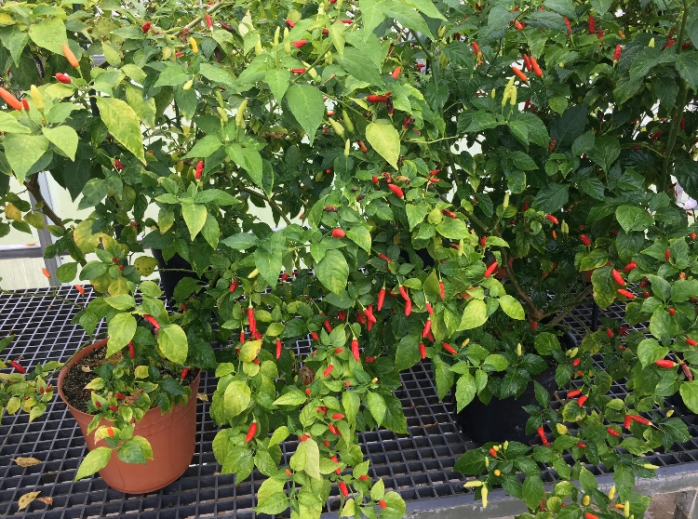 After the tour, we had lunch at Restaurant 1868 and toured the neighboring Jungle Gardens. If you have never visited Avery Island and the opportunity presents itself, check it out! 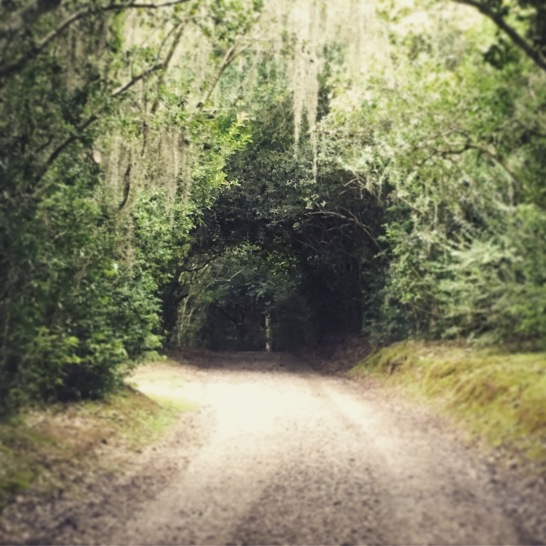 We most definitely hit up the gift shop after all the touring and I snagged a copy of the Tabasco cookbook (cookbooks, in my humble opinion, often make the best souvenirs). As we flipped through the recipes, knowing something Tabasco was in our foodie future, one recipe really caught our eyes.  Grillades.

Grillades (get your Cajun on and pronounce it “gree-yahds”) is a traditional Creole breakfast specialty of thin-sliced veal or beef braised in a tomato-based gravy until fork-tender and served with grits or spoonbread. Historically,  the dish is made, refrigerated overnight, then reheated and served the next day.  However, there’s no definitive history of the dish, no distinct origin or starting point.  The word sounds French, but there is not really a literal translation of the dish.  Regardless, grillades and grits continue to be a tradition at many a Sunday brunch in Louisiana.

So we tweak the recipe just a little by using cubes of chuck roast, swapping the typical green bell pepper for Hatch peppers and upping the amount of Tabasco just a bit.

Because, you know, Tabasco is my life right now 🙂

Season the chuck roast cubes with salt and pepper.  Because this was a post-trip cook for us, we used Avery Island salt, freshly ground black pepper and the Tabasco pepper pulp to season the beef.  The pulp is really interesting – it’s what is left behind after the peppers and salt come out of the aging barrel, is mixed with vinegar and pressed.  It has the spice of the pepper and a hit of the vinegar that makes it Tabasco sauce. 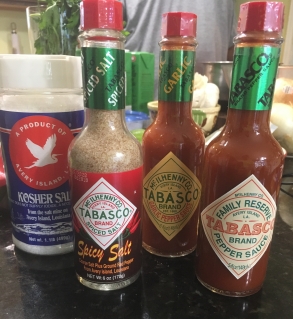 In a Dutch oven or heavy-bottomed pot, heat about 2 tablespoons of the veggie oil.  Work in batches so that you don’t crowd the pot and sear the meat on all sides.  As it is browned, remove the beef from the pot and set aside. 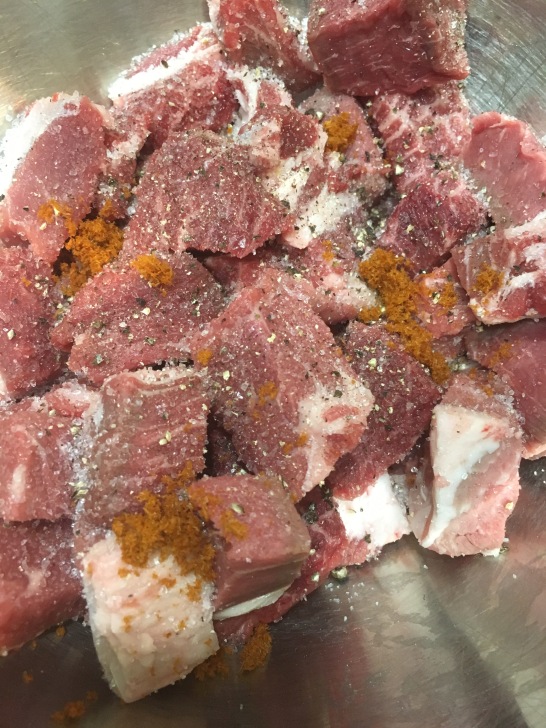 When the beef is browned, add the remaining veggie oil and the flour to the pot.  Stir the flour over medium heat for about 30 minutes to make a dark brown roux.  The last roux we made was for the Etouffee and we stopped that one at a “peanut butter color”.  This one goes further – to a nice, dark, chocolate brown.

Add the onion, the peppers and garlic. Cook for about five minutes, stirring often, until the veggies are soft.

So, I know that in Creole cooking “the trinity” involves green peppers.  But… it’s Hatch pepper season and we had some at home, so why not use them? Just a heads up, they do provide a little extra heat to the grillades.

Add the tomatoes and thyme.  Cook for another three minutes or so, stirring often.

Add the beef broth and red wine (you know the cooking-with-wine rule by now, yes?).  Stir well for several minutes, scraping up any browned bits from the bottom of the pot. 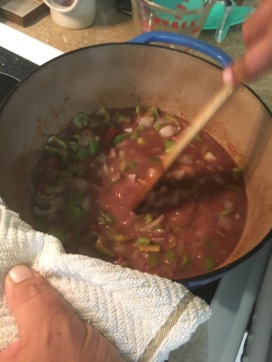 Reduce the heat and simmer, covered, for an hour and a half.  Stir occasionally, until the meat is very tender.  Trust me, the time spent on this dish is worth it!

Remove the bay leaf and stir in the parsley, reserving some for garnish. 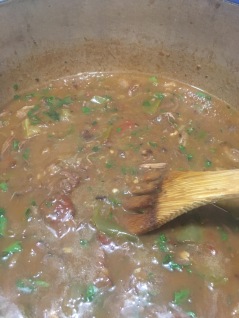 So this is where you would typically let the dish cool, then store it in the fridge overnight.  We completely ignored that and served the grillades up with cheese grits.

Remember the Grits and Greens Casserole from a while back?  This would also be amazing here! 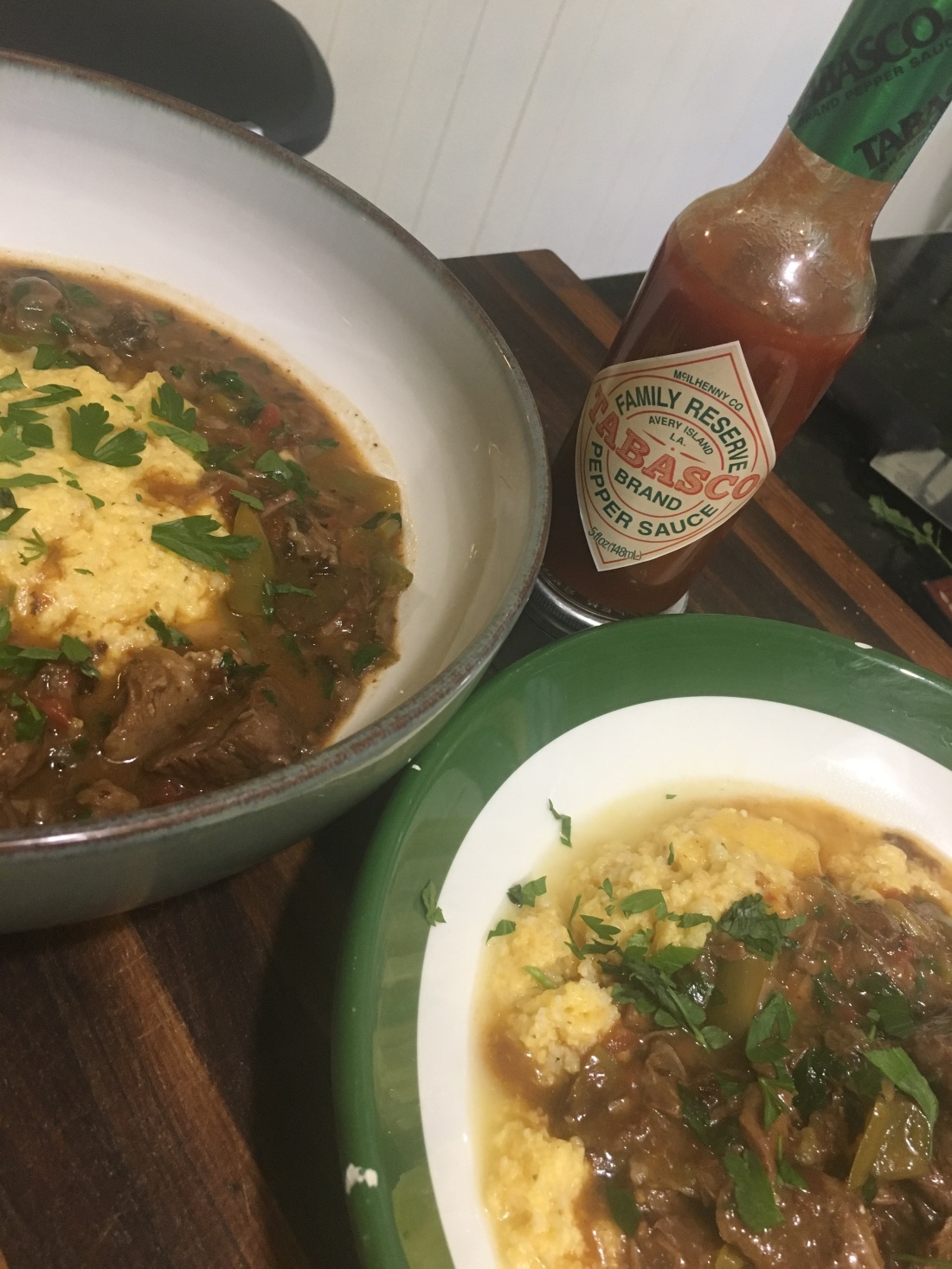 Will and I plated a little differently… but both completely enjoyed this food souvenir. What’s one of yours?

Season the beef with salt and pepper.

In a Dutch oven or heavy pot, heat 2 T of the oil.

Working in batches, add the meat and brown well, removing each batch to a warm plate.

Add the remaining 2 T oil and the flour to the pot.

Stir over medium heat for about 30 minutes to make a dark brown roux.

Cook, stirring often, for about 5 minutes, or until soft.

Add the tomatoes and thyme and cook, stirring, for 3 minutes.

Add the broth and the wine.

Stir well for several minutes, scraping up any bits form the bottom of the pot.

Reduce the heat and simmer, covered, for 1 ½ hours, or until the meat is very tender, stirring occasionally.

Stir in the parsley, reserving some for garnish. 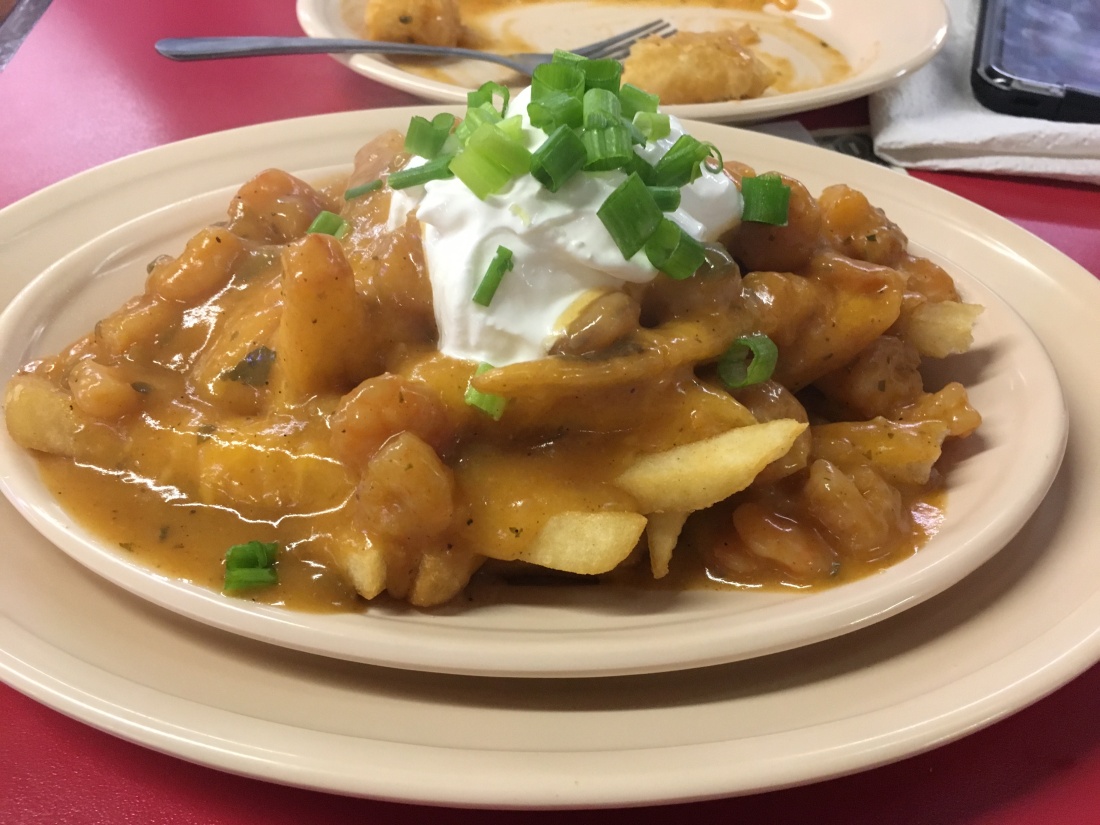 Will and I love a good road trip.  It’s one of the best things ever to get in the car and go exploring for the day or pack up for a quick weekend getaway to a more familiar location.  We will make a run to the Hill Country for a boot fitting, aim a little more South to find a new Texas winery, find restaurants or farmer’s markets in Houston, load up Silver Sadie Wonderdog for an overnight beach trip, or head to dozens of other places just a drive away.

One of our favorite roadtrip getaways is in Lake Charles.  Say what you like, but I am a sucker for a good penny slot machine or some video roulette.  Craps and Blackjack tend to call Will’s name. Depending on the weather, our favorite place to stay offers a lazy river to float during the day and a lovely wine and tapas bar with live piano music to wind down in at night.  All that said… it’s never a trip to Lake Charles without a visit into town to Steamboat Bill’s.  The pistolettes are perfect.  The gumbo is amazing.  The winner though?  The Swamp Fries. Cheese fries smothered in shrimp etouffee.

Will may have been just a touch hesitant the first time we ordered them.  Etouffee goes on rice, right?!?  Y’all.  We get these every stinkin’ time now.  The etouffee is so tasty and pairs so well with a crispy, hot cheese fry.  We’ve since made them at home with our own version of a crawfish etouffee and every time they take me right back to Lake Charles.

Did you just hear that slot machine ding???

Etouffee is a fairly simple recipe that takes just a little bit of time to bring on big flavors. It’s great post-crawfish boil to use up some leftover tails but you can easily sub in small shrimp instead.

To start, season the diced veggies with salt, pepper and cajun seasoning.  In cajun cooking, these three veggies are known as “the Cajun trinity”.   This combo of veggies is essentially the base for most cajun dishes and more often than not, added to roux as the beginnings of gumbos, soups, stews and jambalayas.  Typically, the bell pepper is the traditional green bell pepper – we often use red, yellow and orange peppers though for their variety in sweetness and color.

Melt the butter in a skillet until it browns and begins to smell nutty.  You’ll see the fats in the butter starting to foam around the edges as well.  Add the seasoned veggies and saute until they begin to soften.  Add Tabasco, worcestershire and garlic to the skillet and saute another couple of minutes.

Add the flour to the veggies and cook until it is light brown in color.  Whisk in the stock slowly and carefully to avoid creating lumps in your roux.  Add the crawfish tails and bay leaves. 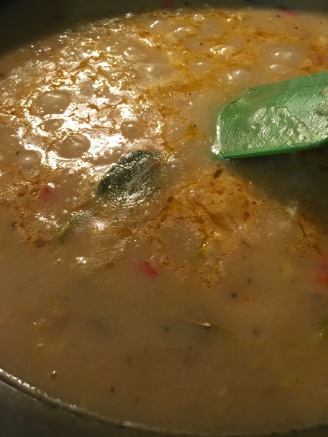 Simmer 20-30 minutes, until the etouffee has reached your desired thickness.  Don’t forget to remove the bay leaves when you are done simmering!

You can go traditional and serve with rice…

There you have it – one ticket to Steamboat Bill’s Lake Charles.  Enjoy the ride and let me know how your penny slots pay off 😉

Melt butter in skillet and brown until it smells nutty.

Add tabasco, Worcestershire and garlic to veggies, saute another couple of minutes.

Add flour to the veggies and cook until it is light brown in color.

Simmer 20-30 minutes, until it has reached your desired thickness.

Serve over rice or french fries.