Baby, it’s cold outside! We just blew past those fall-like temps into the frigid winter of Gulf Coast Texas.  For a couple days at least 😉

While our winters may not be as brutal as our Northern friends, or last as long, the chilly outside still calls for warm dinners inside. In our house, that typically means either a slow-cooking something on the stove or a quick, warm, filling dinner before dark falls. This one fits the latter.

This recipe is adapted from one a friend shared with me years ago – back when we were just college babies learning to fend for ourselves. We didn’t add mushrooms and if we had there surely wouldn’t have been good wine to flavor them with! This beef stroganoff is time-tested and one I’ll happily make, good wine in hand and fond memories of friends in mind, for many years to come.

Here’s to you, Becca!

What recipe have you held on to for years?  Tell me about them!

Bring a large pot of water to boil.  Salt the water fairly generously and cook the egg noodles until al dente.  Set aside.

Let’s talk mushrooms for a minute: 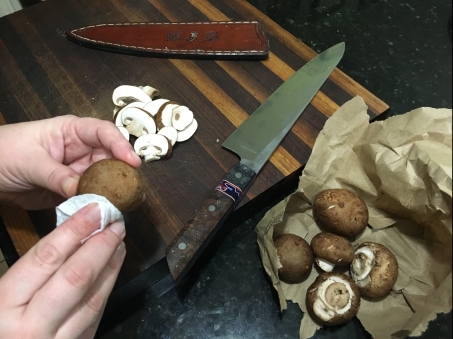 To clean your mushrooms, avoid running them under water. Mushrooms retain moisture like a sponge, giving them more will prevent the mushrooms from browning nicely and give more of a chewy texture to them once cooked. Instead, use a damp paper towel and brush off any excess dirt.  Slice or chop them in similar sizes so that they cook up evenly.

Finally, don’t crowd the mushrooms in your pan and wait a bit before salting them.  Give your fungi some room to groove as they cook so that they saute and brown rather than steam.  Salt will bring out the moisture in the mushrooms, which is true for any veggie.  With mushrooms though, you want them to retain the moisture for a bit so that, again, they brown rather than steam. I’m willing to be that those that don’t care for mushrooms have had ones that lean more towards the steamed, flavorless side of cooking.  Let’s avoid that!  Mushrooms are like a sponge, right?  They’ll take on some of whatever flavor you give them but you want to give them a chance to develop their unique nutty, earthy flavors first. 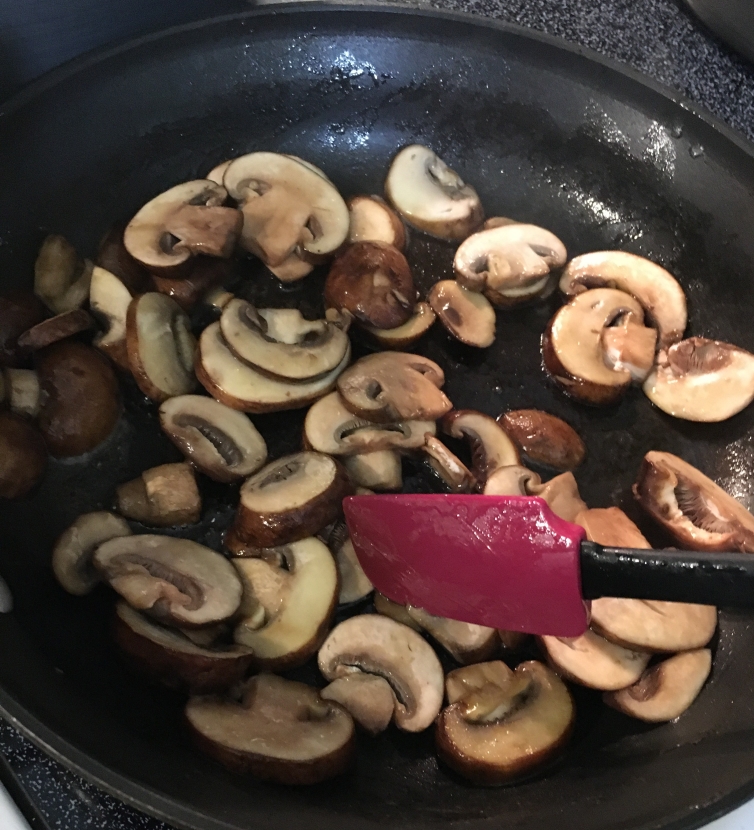 If you have a mushroom-loving family, you can most certainly start the mushrooms in a larger skillet and once they are beginning to brown, add the ground beef and cook it all together in the same skillet.  Just remember, you want to give the mushrooms a little time to brown up before salting them. I live in a house divided – one of us says they do not like mushrooms.  It’s okay, we can’t all be perfect 😉 I’m willing to go with it on this one though – I kind of like the presentation of having the sauteed mushrooms on top of the stroganoff rather than all mixed together.

Back to the recipe! In a medium skillet, cook the mushrooms in just a touch of olive oil or butter. Once the mushrooms begin to brown and release their liquid, season them with salt and pepper. Reduce the heat and let the mushrooms continue to cook as you move on to the beef. I may be biased… but a splash of hearty red wine never hurts here.  You know the rule though – make sure it’s a wine you would drink as the flavor intensifies as it cooks. Worcestershire sauce is also a nice addition to the earthy veggies. 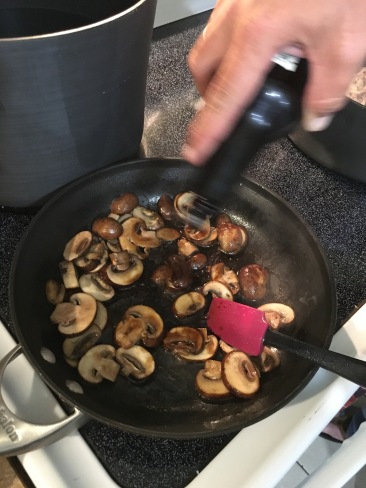 Saute the onions, garlic and ground beef in a large skillet over medium heat.  When the meat begins to brown and the veggies soften, season the pan with Worcestershire, salt and pepper to your liking. 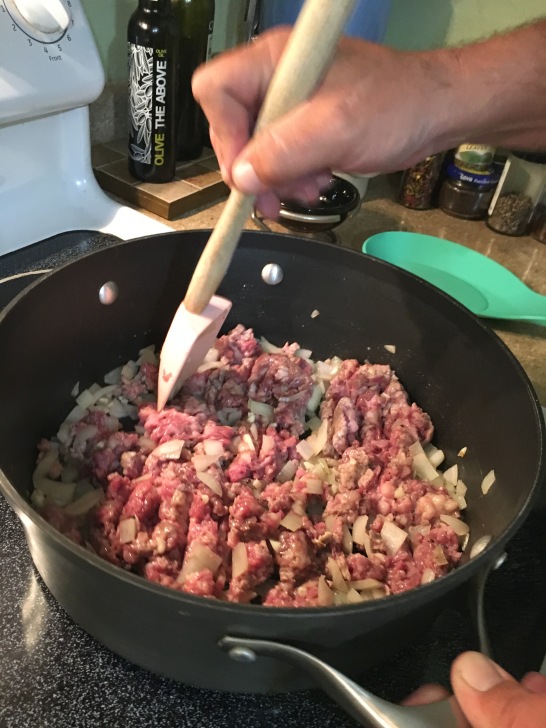 If your ground beef was fairly lean, add a tablespoon or so of butter to the pan. Add the flour and stir to absorb the fat and cook the flour a bit. Stir in the beef broth and cook until slightly thickened, about 5-10 minutes. 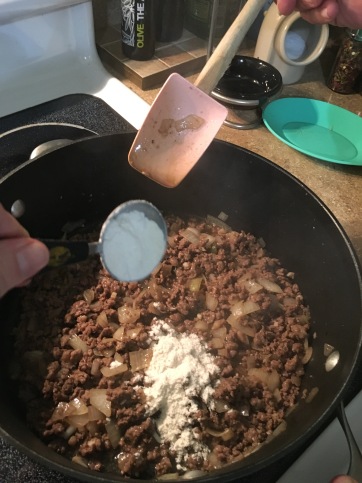 Stir in the sour cream and check your seasoning, adding salt and pepper as you like. Let the stroganoff simmer until heated all the way through. 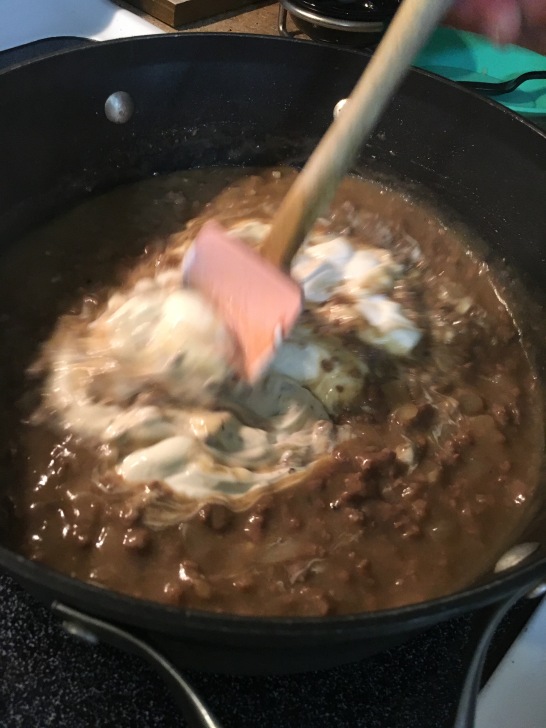 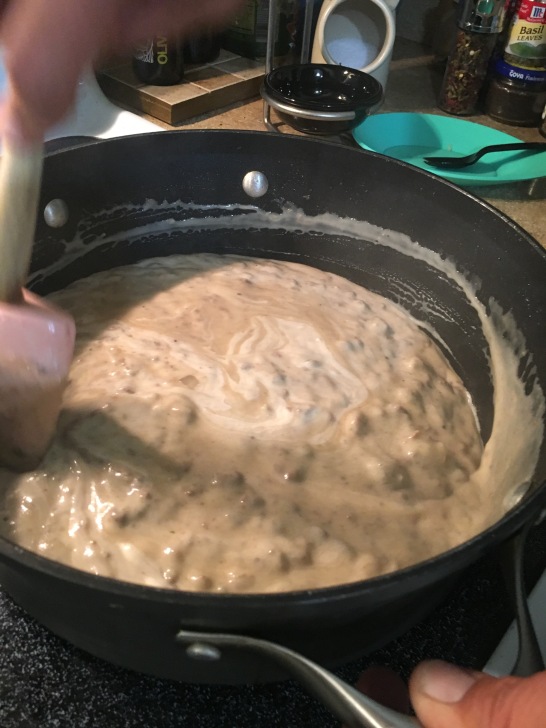 Spoon the stroganoff over the egg noodles and top with mushrooms.  Enjoy!

Bring a large pot of water to a boil.

In a medium skillet, cook mushrooms in just a little olive oil.

Once the mushrooms release their liquid and begin to brown, season with salt and pepper.

Saute the ground beef, garlic and onions in a large skillet over medium heat until the meat begins to brown and the veggies soften.

Season the meat with Worcestershire sauce.

If the beef was fairly lean, add a couple tablespoons butter to the skillet.

Add the flour and stir to absorb the fat and cook the flour.

Stir in beef broth and cook until slightly thickened, about 5-10 minutes.

Stir in the sour cream,  season to taste with salt and pepper.

Continue cooking until sauce is hot all the way through.

Serve sauce over egg noodles and top with mushrooms.

View all posts by Lindsey Blackstock